Girls with Guns (and Bows) in South Africa

I just recently returned from an amazing trip to South Africa. Before I left for my trip I packed up all of my Girls With Guns gear. I packed for warm and cold weather because the weather in South Africa during their winter is unpredictable.  I sure was glad that I packed my cold weather gear. I think I wore shorts maybe four days out of the whole month I was there.

We were in the Limpopo province of South Africa at Doornrand Hunting Safaris. My trip started off slowly. I hunted with a bow for a few days. I was looking for a zebra, but never got a shot. I was able to get a shot on a Waterbuck. However, I did not recover my kill. My arrow did not get enough penetration and after 14 hours of tracking we decided that we would let someone else shoot it if they saw it. A friend was able to get a shot on the 31” Waterbuck. He was the 2nd biggest Waterbuck of the trip. 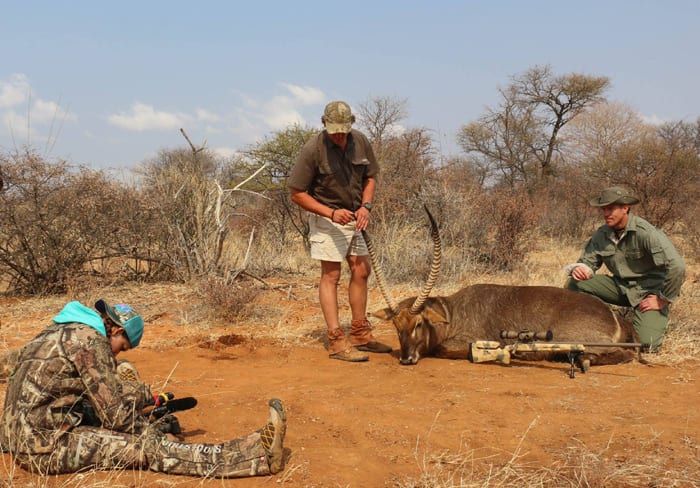 My hunting time was now up. The real purpose for my trip arrived. I was hired to film for a Prince of Saudi Arabia for an entire month. When Khalid arrived, the real hunt began. I was able to film amazing hunts that I could only dream of accomplishing. He shot over 20 animals at Doornrand. I got to film almost all of them. It was incredible.

After Khalid shot all of the animals on his list, my dad and I sat out for a morning looking for a zebra again. We decided that if a zebra didn’t come I could shoot either an impala or a warthog. 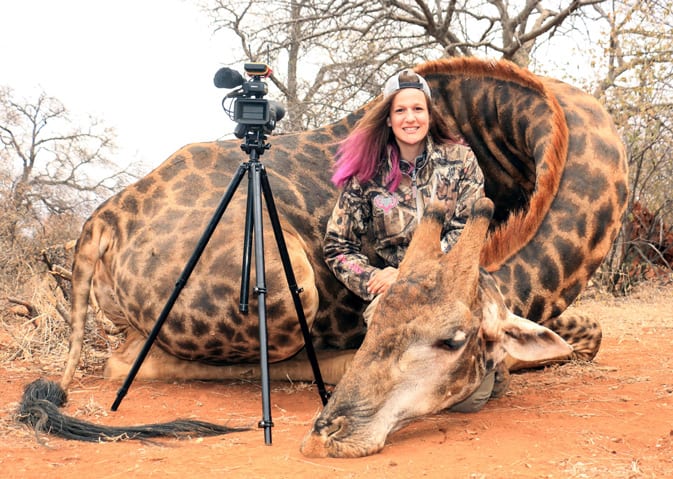 The zebras started to come into view. I grabbed my bow and was ready to take a shot. Unfortunately, they never came closer than 100 yards. I put down my bow and sat back down waiting for what was to come next. A huge herd of impala started to come into view. It was just females at first. A male started to walk in toward the blind. He was beautiful. My dad told me to grab my bow and get ready. We slowly got prepared and the impala got distracted by something. My dad told me to draw back and put my 30-yard pin on him. Once I was steady, I took the shot. The Black Eagle arrow flew effortlessly pushing the Grim Reaper through the impala. He jumped really high after the impact. He ran about 50 yards and my dad saw him go down. It was an awesome hunt and my first kill with my Bear Archery Escape SD. 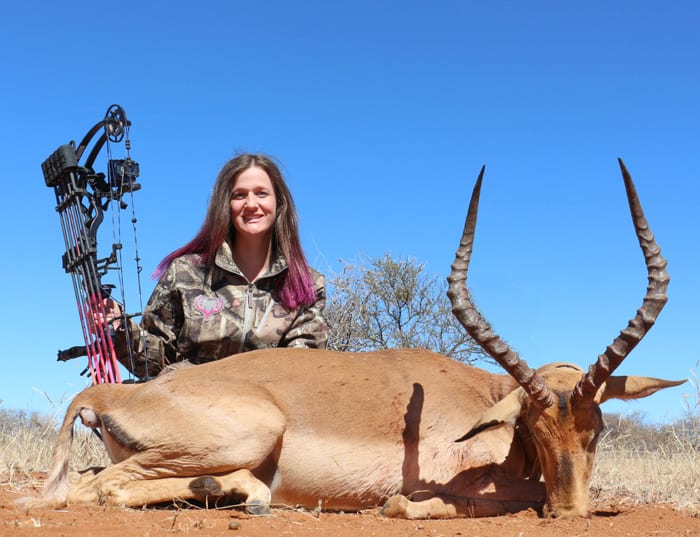 Baylee with her Impala at Doornrand Hunting Safaris

Every time I go to South Africa my clothes rip. The thorns there are unreal. The longest thorn I found was almost a foot long. None of my GWG gear ripped. I really wanted to test my gear while I was there. I walked through the thorn bushes and trees purposefully just to see if they would rip. Not a single scratch was found on my gear. I’m not exaggerating either. I really did test it. I got my hair caught (and ripped out) on the thorns and my face and hands got cuts and scrapes on them. I wanted to make sure the gear I was wearing was the best and, in my opinion, it is. This was the first year I came back with perfect clothes…no holes, no tears, no sign of wear. 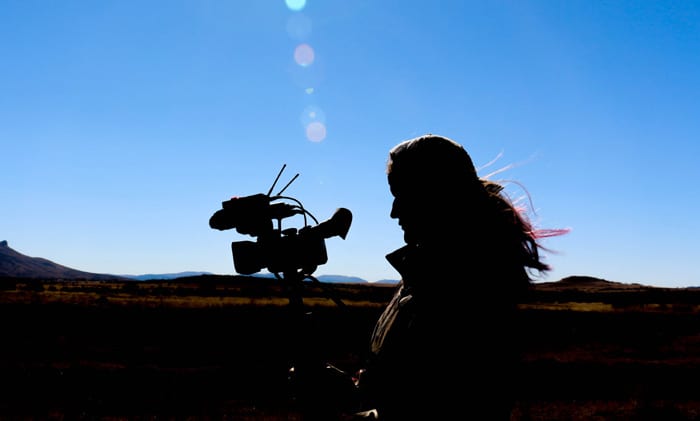 I was able to film some pretty awesome hunts on this half of the trip, also. It was even colder in the Eastern Cape. My GWG gear was worn every single day. I had to start a rotation of what gear I would wear so that they would even get washed by the workers. Sometimes my outer layers wouldn’t get washed for a few days because I was so busy wearing them.

I was able to film hunts at Inkulu and at three other places we visited in the Eastern Cape. One of the hunts was quite a few hours away, so we decided to take a helicopter. Now you have to understand, I hate flying. I would rather drive for six hours than fly for an hour. Not a lot of people know this about me. It always makes me laugh because I have flown for hundreds and hundreds of hours like it’s nothing.

The helicopter landed on the property and we loaded up our gear. We began to take off and I started to get queasy. My dad gave me a plastic bag beforehand just in case. The flight was surprisingly smooth for the most part. We hit a rough patch on the flight to and from the safari. It felt like we were falling at one point. Other than that, it wasn’t too bad.

The Prince’s hunt was coming to an end and he was just hunting some additional animals. He told my dad and I we could go hunting if we liked. How could we say no? We geared up and went into a ground blind that had just been set for us. I had my bow with me and I was looking for a kudu, the grey ghost of Africa.

I spotted some kudu off in the distance. They circled around us a bit and just stayed about 200 yards away from us the whole time. Then some Sable started to come in. The sable got settled in and that was pretty much the green light for the kudu. About 30 kudu started walking in. They were very spooky. They would come in, spook out, come in and spook out again. My dad and I spotted a really nice kudu that we were going to try and get on. We weren’t able to get a shot on him. After seeing how the kudu kept reacting we decided that I would take a shot on any of the good kudu bulls that would give me a position. I drew back my bow about 5 times without getting a shot.

I heard loud noises behind the blind. I looked out the back window and saw three huge rhinos making their way to the feed. Two of the rhinos came in and started eating, but the one stood about 15 yards away from the blind and just stared at us. I was scared, honestly. What if he wasn’t used to the blind? What if he was going to charge? My heart started racing and I tried to focus on the kudu. Finally, the rhino started to eat with the others and I was able to breathe again.

A really wide kudu started to come in to feed. I wasn’t able to see him from my angle, but my dad told me to draw back my bow. Once I was at full draw for the 6th time, I leaned over to the window and put my 20-yard pin on the kudu’s shoulder. I got steady and took the shot while I was sitting. The arrow made impact but it was lower than I wanted it to be. My dad got a little worried and we watched as the kudu ran away. The arrow fell out and then the kudu fell down. I guess the shot wasn’t as bad as we thought. 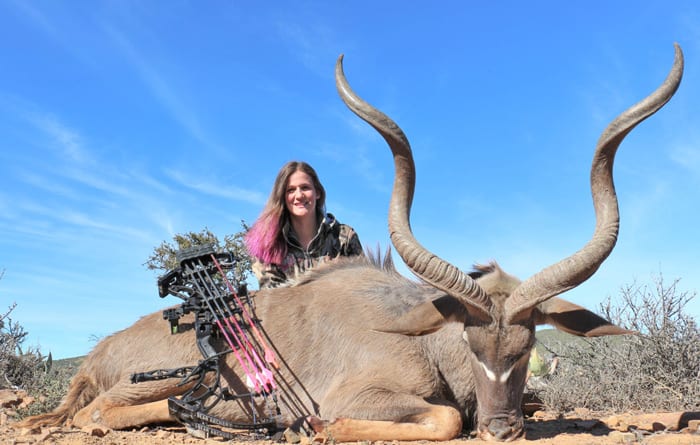 Baylee with her Kudu at Inkulu African Safaris

My dad and I celebrated (well, more my dad than me). The other kudu spooked away and the rhinos moved farther away. My dad called in on the radio and we began tracking the kudu. It was an easy track job for sure. He was down about 95 yards away from the blind. It was a heart shot. If it was an inch lower it would’ve been a really bad scenario. After doing interviews and pictures, my dad and I discussed why the shot was low. #1: he was at 25 yards and I used my 20-yard pin and #2: I had never shot sitting before and I was leaning which could cause the flight of the arrow to change slightly, but all in all, I got my trophy.

The next few days I filmed for my dad as he was hunting some Springbok. My dad had shot two and decided to let me shoot one. We tried multiple times getting on a common Springbok with my bow. It was extremely hard and our time in the Eastern Cape was coming to an end. I decided to pick up a gun.

I hadn’t shot a gun in over a year. The last time I shot one was when I hunted my Giraffe in 2015.  I picked up the rifle and we got in on a really nice heard of Springbok. We figured out which one was the best and I got set up on the safari truck. I put the sights on him and pulled the trigger. Down he went right on impact! We celebrated once again before walking up to the Springbok. He was beautiful. The shot was a high shoulder shot (which caused him to drop instantly). I guess I should use a gun more often. 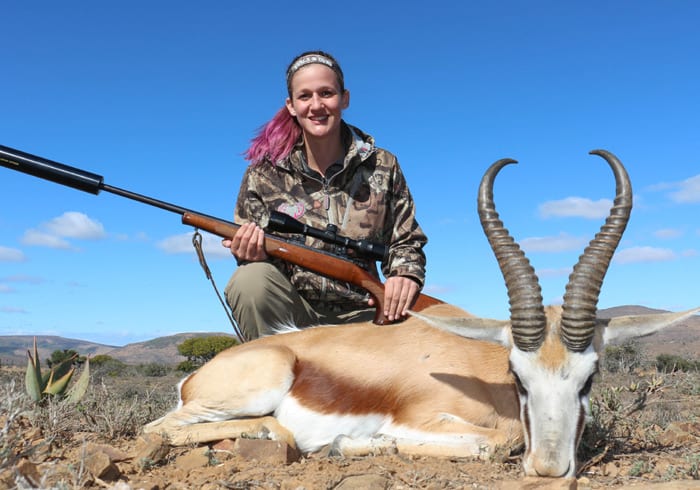 My month long trip in South Africa was incredible. I couldn’t have done it without my Girls with Guns gear.

“I figured since I’m on team Girls with Guns, I should probably shoot a gun once in awhile.”