My First Pass Through

My dad and I were on a month long trip to South Africa. We had been there for a few weeks and had hunted some great animals. One of the animals on my list was a blesbok. The blesbok is in the antelope family and has a white face and a reddish-brown body. Some of them have white “socks”.  I really wanted to hunt this animal since it is very elusive and when you do see them they don’t stick around too long.

My dad and I had tried to get on a good blesbok for a few days. It was just slow going. When we were not hunting blesbok we would see big herds of them. Of course, we wouldn’t see any when we were actually hunting them. Not one to get discouraged, we decided to try again and I’m so glad we did.

I packed up my Bear Archery Rumor Bow and Outlaw Black Eagle Arrows and we set out to get a Blesbok.  We got on the safari truck and headed out at about eight in the morning. We drove for a few minutes before making it to our “hide” (ground blind) as the South Africans call it. My dad and I got situated in the blind, set up out cameras which also included our GoPros. I also had a GoPro on my bow facing me. We had previously sighted in my bow with the additional weight of the GoPro so that everything would be “dead on.”

The morning was full of action.  There were wildebeests, impalas, warthogs and even a large number of elands. It was good, constant action, just not the kind of action I wanted.  We came back into camp for lunch and made our plans to try again in the evening.

When we went out that evening we saw more wildebeests and impalas. They are beautiful animals and I always love watching them and seeing how they reacted so quickly to different things. I had shot an impala with a rifle in 2013 but I really wanted to get one with my bow.   I have also always wanted to shoot a wildebeest so it was tempting to take a shot but, this day I was holding out for a blesbok.
The evening got slow and all we could hear were birds. Then, we saw two female blesbok walk in toward us.  They stopped and drank water out of the little pond that was in front of us. My dad told me to quietly get up and grab my bow. I did and as I was waiting for the male we knew would soon be coming in, we watched the females start to leave.   I got kind of bummed out. Now I thought the male wouldn’t come in because they usually come to the females and they were leaving. Not sure what to think but definitely disappointed, things changed for the better as not five minutes later a big male blesbok walked in to the pond. He was beautiful.  He had great color and great horns. My dad looked at me and whispered that it was a good one. We barely had enough time to turn on the cameras. He was in for about ten seconds before I took the shot. It all happened so fast. I watched the arrow pass through and blood poured out of its side. The Grim Reaper broadhead had done it’s job and I knew it was a great heart shot. We watched the male until it was out of view and then reviewed the footage. I was extremely excited since this was my first pass through on an animal with my bow. 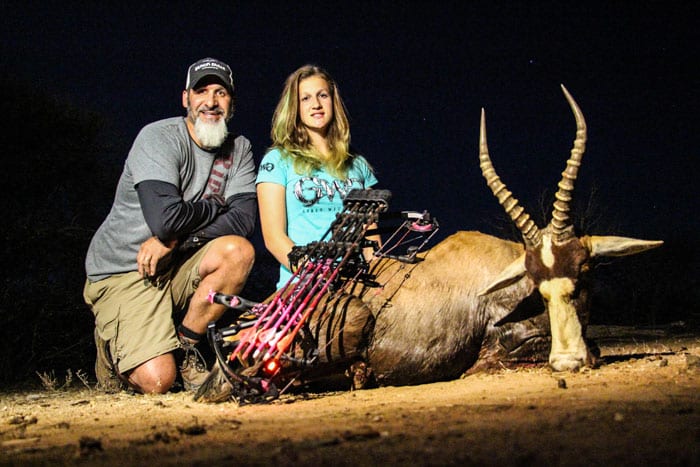 Proud father and happy daughter with her first pass-through and first blesbok.

After letting him sit until almost dark, we walked out and tracked him. We found the arrow just behind where it made impact. It was blood covered but still in shooting condition.  We followed the huge blood trail until we saw the blesbok. He had only gone about thirty yards from where I shot him.  He was perfect. I was super excited when we walked up to him. We looked at the spot where he was hit:  beautiful pass through, perfect heart shot, deadly hole created by the Grim Reaper broadhead.

After taking pictures and video interviews, we loaded him up on the safari truck and went back to camp. He was a massive animal and measured 16 inches.