My recent trip to South Africa and Doornrand Hunting Safaris with Danie and Louise Krige. was an incredible trip.  This trip was our first of what will be many with Doornrand and Danie Krige.  Our group consisted of new and of old friends and we just had a trip of a lifetime together.  Everyone left extremely satisfied with their hunt and all the great care and service they received from Doornrand.

One of the highlights of the trip was Khalid Sultanâ€™s Cape Buffalo hunt.  Khalid is a client who has become a dear friend and he was going to highlight his time at Doornrnad with his pursuit of the Black Death.  Khalid would be looking for a mature bull that he would be able to hunt with a 375 H and H rifle.  Khalid was a bit concerned about the aggressive nature of the Buffalo as he is a new father of Michelle and this new addition to his life had him contemplating the safety of such a hunt.

We took off early that morning and decided to sit at a blind that we had seen the biggest and most mature buffalo at a couple days earlier.  Khalid liked the option of pursuing this beast from a blind for safety reasons and also for the sake of being able to make a great shot from a supported position.  We ended up sitting for 6 hours that morning and we saw many animals but none of them were the buffalo.  Khalid hates to sit in a blind and endured the morning but was more than ready to change tactics to a spot and stalk scenario now.

We started driving the roads of the property to cut fresh tracks for the Cape Buffalo Bull and after driving many miles we still hadnâ€™t found any fresh tracks.  We then got a call from another PH who was hunting with friend Jason Zhulke and they saw two bulls at the one total end of the property and they believed that one of them was the particular old bull we were looking for.  We immediately started in that direction.

We drove slowly into the area and we spotted the two bulls in some thick cover.  We were trying to figure out how to make a stalk work that would get Khalid into a good shooting position.  We made the plan and then started to carry it out and the two buffalo decided to take off after first weighing out the option of coming toward us.

We went back to the vehicle as it was getting late and we decided to look to see if we could find out where they had gone to.  We looked for a very long time and as it was getting dark we decided we would start to head back from the property we are on toward the lodge.  As we were just about sure we wouldnâ€™t see them again all of a sudden the big bull came through the thick brush heading right at the safari vehicle.  He had his head down a bit and was coming right at us in a very angry manner.

Khalid was ready quickly with his 375 H and H rifle and he put a great frontal shot right on the Cape Buffalo.  The buff spun around and we quickly got off of the truck and pursued the hit animal.  He had gone about 100 yards and was standing broadside and Khalid again made another shot.  There was a second bull with him that was looking like he was going to charge us on several occasions.  In fact at one point Danie had us start moving right back toward the truck for safety.  We will come back to this bull later on.

We stayed with this bull and Khalid made another shot and the animal was down and done.  The big bull would have died from the first shot for sure.  There was lung blood all over the ground.  But in Africa when hunting some the bigger animals you continue to shoot until the animal is down and done.  This bull ended up being just over 40â€� and Khalid had completed one of his lifetime goals on this great animal. 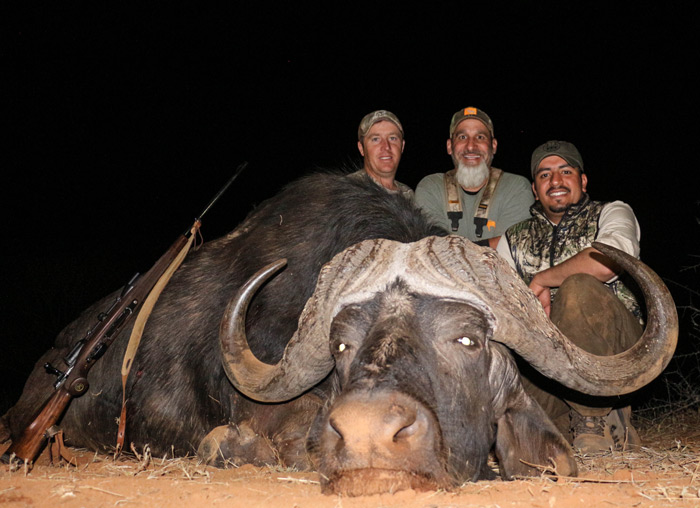 IF we back up just 3 days from this event we find a second Cape Buffalo bull getting taken.  Ron Shirey, Senior Hunting Consultant at Journey Hunts, had no intention of hunting a Cape Buffalo.  There were two other bulls that were running with the big bull and neither one was going to grow to the 40â€� mark genetically.  Freek Terblanche, the owner of Doornrand Hunting Safaris, had made Ron a great offer on this cull animal.  Ron decided to go the blind in hope of making a pistol casualty of this bull.

After a morning sit the three bulls came into blind to drink.  I was there along with my daughter Baylee filming the entire hunt.  The bull came into about 25 yards and presented a perfect broadside shot for Ron.  He settled in the scope on his .41 Magnum pistol and made a great shot.  The bull spun around and Ron shot again.  It wobbled quickly and had gone only a few feet.  Because it was still standing Ron decided to put one more shot into the big animal.  On the third shot the animal stood for a couple seconds and then went down.  He had only gone about 10 yards total.  Ron had made two perfect heart shots on this great bull and harvest an incredible animal with the pistol. 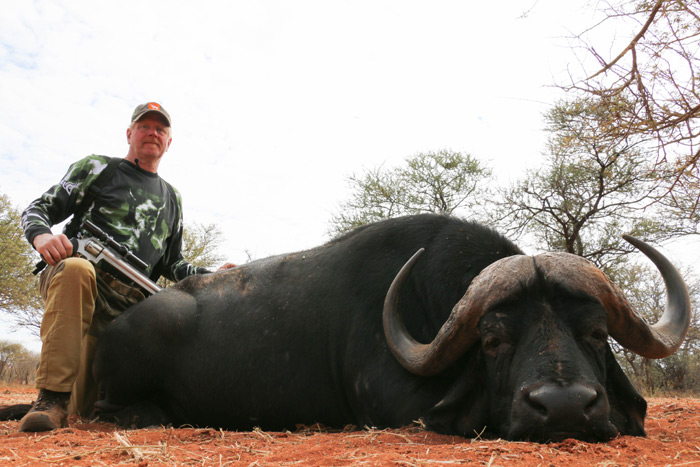 With both of these bulls being down there was the one remaining bull on the property.  On both of the other two hunts he was there with the bulls.  He was a flat bull without a lot of drop in his horns. He was wide but just not a great genetic bull.  Freek offered me the bull at a deal I couldnâ€™t resist.  I decided I would take my dangerous game with my bulked up Arena 30 from Bear Archery and go for a spot and stalk hunt of a lifetime.  I was carrying 5 Black Eagle Arrows Rampage Arrows that weighed in at 770 grains and were tipped with a vicious two blade by German Kinetics.

We started out the morning looking for fresh tracks.  We wanted to cut the freshest tracks and then start pursuing this bull.  We couldnâ€™t find any fresh tracks.  We then came to the back corner of the property and there found that fence lifted up from the bottom and it was broken off on a post.  We looked over the scenario and realized that the buffalo had pried his horns under the fence and pulled it out of the ground and had gone on to another property.  We informed Danie and he quickly called the neighbors.  I had realized that my dream hunt for a buffalo had potentially come to an abrupt end.

Danie spoke to the neighbor who was going to go and look for the buff.  Then a very disturbing call came in to Danie.  That buffalo, who we knew was very aggressive because of our previous encounters, had gone out under our fence, had broken through two more properties and then had swam across the Limpopo River and crossed into Botswana where the military shot the buffalo.  They sent Danie a picture to confirm if it was his bull and it was.  My dream was quickly crushed.  I tied to joke with the guys in camp that the buff ran through three fences and swam the croc infested river going into a new country because he was fearful I was on the way but I was heartbroken.

The government of Botswana is very concerned about diseases that buffalo can carry and that is why they shot then burned the animal.  I was crushed but it was a huge loss for Doornrand Hunting Safaris as they lost an animal that was being hunted for a price and now was killed for no money.  It was a sad day but just one of those uncontrollable factors that occurs in the hunting world.  Maybe I will get to hunt one again at some point Lord willing.

If you would like to book your Safari of a lifetime to hunt a Cape Buffalo or any African Species you can reach Matt at matt@journeyhunts.com.  We offer package hunts or individualized hunts made custom just for you.