Waterbuck at the Watering Hole

My journey to South Africa has been amazing so far.  We’ve seen a multitude of animals. They are plentiful here at Doornrand Hunting Safaris.

I have been on the lookout for a zebra. I hunted for one last year and did not get a shot opportunity. They are very smart and aware animals. The first time I saw a zebra I told my dad that I wanted to shoot one. There was a herd that we had kept seeing for 15 days in a row which is very rare. Some hunters only see them once on their whole trip. We were very thankful for the experience.

I saw the one that I wanted. It was an older male with very nice, clean stripes. He had a cyst on his chest, but he was gorgeous.  He needed to be culled.  Unfortunately, I wasn’t able to get a shot at a zebra that trip. One of the other hunters that was on our trip was able to harvest him. I was kind of bummed, but at least someone got him.

This year, again,  it has been my goal to shoot a zebra. It’s the one animal I’ve wanted since my previous trip to South Africa. It’s a long flight, but it’s worth it. The sights are amazing. The animals are plentiful. The food and accommodations are outstanding.

We arrived in the morning, got our luggage at the airport and made our way by car to Doornrand. It’s about 4 and a half hours from Johannesburg. We got into camp and did a game drive for about an hour and watched the sunset from a lookout deck on the property. I have to say the sunsets here are probably some of the prettiest you will ever see. 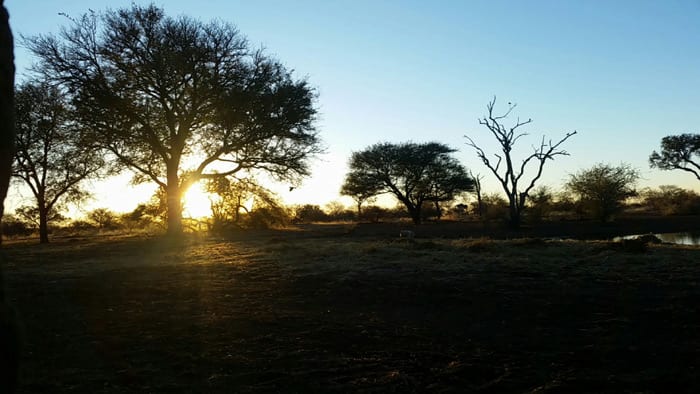 After a great dinner and some sleep, we got up and going the next morning. We sat in a “hide” (blind that is built into the ground) for the morning. We saw many waterbucks and some impalas but it was a slow morning. It was cooler outside than normal, so the animals didn’t really move much. We went in for lunch and then went out again. It was also very slow for me. My dad, however, was able to harvest a great Nyala.

The next day was also slow due to the weather. A few animals came in and out, including some zebras but they were too young to shoot. We saw some baboons in the distance. They came in a few minutes later and I was able to get a shot off.  I thought I had a good shot but unfortunately, we did not recover it after a few hours of tracking.

The trackers ended up finding blood and his tracks going over the fence. The trackers said they are very tough animals. Boy are they tough. I was thinking, “Oh, yea sure, it’s just a monkey.”  Well, I was way off. We tracked that thing for hours and hours. But kept going strong; pretty incredible animal. 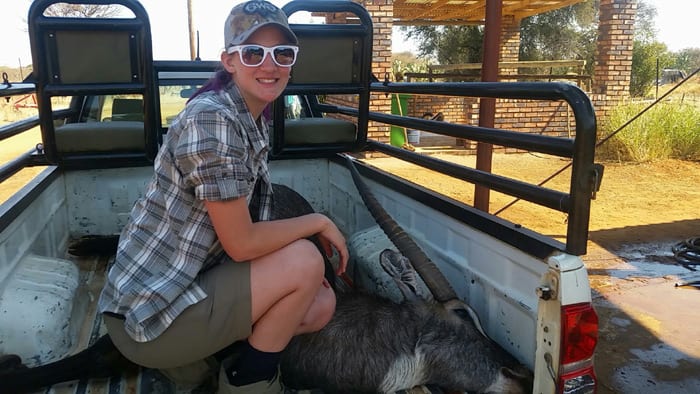 Day three was going great. The night before was very cold which usually means the daytime will be very hot and  it was. The morning feed was set out and we were ready for action. We sat in the hide for about 5 minutes before a female waterbuck made herself present.

I have seen so many waterbucks on this trip it’s unbelievable. I’m not a huge fan of waterbucks actually. They are very nice animals, but I haven’t really been interested in them.

More waterbucks began to come in with some impalas. I was sitting at the time. My dad was up glassing the animals as they would come in. He turned around, faced me and his eyes got really big as he whispered, “That’s a really good waterbuck, Baylee”. I got up quietly to take a look. My heart dropped when I saw him. He was beautiful; absolutely gorgeous.

He was very dark compared to the others I have seen. His coloration was outstanding. The tracker and my dad guessed him at 28-29 inches. I discussed the situation with my dad. I really wanted to get a zebra but this was a great waterbuck that I really liked. We watched him for about 30 minutes. Something spooked the herd and they went out to the treeline. They stood there watching the food area for about another 30 minutes and then slowly came in again. My dad got all the cameras ready. It was almost time to shoot. He was standing quartered away at the watering hole. There were two females in front of him blocking a shot so I had to wait for them to clear. 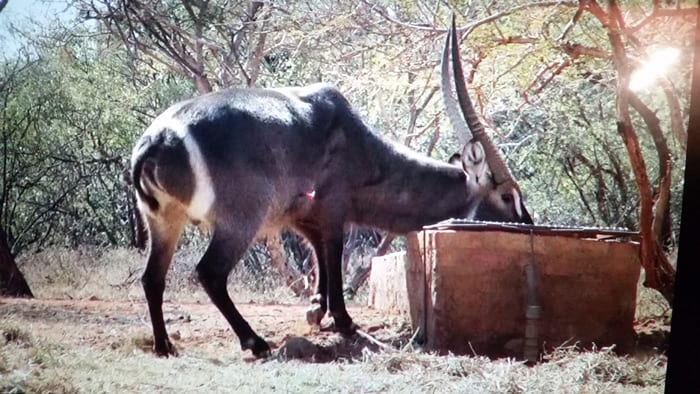 The shot looked good but after an hour wait, the tracking job started.

About 10 seconds later they cleared and the shot was open. My set-up was a Bear Archery Escape SD with my Black Eagle Outlaw Arrows, tipped with Grim Reaper Hades. I thought to myself: draw back, get on target, put finger on trigger, get steady on target, squeeze. As I squeezed, the RipCord Arrow Rest did it’s job and the arrow flight was smooth. It made impact with the waterbuck moments later and the waterbuck was completely shocked at the impact. He compacted as the arrow struck him and then proceeded to run off. The others fled with him. As he kept running some of the others began to stop and look around. They stayed about 20 yards from where the shot happened. We celebrated for a moment and then got focused. We decided to let him sit for about an hour before we would go and track him.

While we waited some gemsbuck came in. A few seconds later two zebras walked in. I grabbed my bow again. We had another arrow ready. Unfortunately, they didn’t give me an open shot.

After waiting we got out of the hide and went to the scene of the “crime” (According to anti-hunters what I do is a crime). There wasn’t blood right away so we walked to where we saw it leave. My dad let me lead the way and attempt to track it myself. I wanted the practice. I would love to get my PH (Professional Hunter) license so that I could “guide” other hunters over here (My brother is the youngest licensed PH in all of Africa. He can’t practice until he is 21, but he has passed the course). I would like to be the youngest female to have it.

We began to see some small spots of blood. Then there was more and more. After tracking for about 20 minutes the blood started to thin. Pete, our tracker, then took over for me and followed the waterbuck’s tracks. We followed it for another 150 yards until we decided to come back to the hide and call PH/Manager of Doornrand, Danie Krige, so that he could come help us with more trackers. I was now starting to feel that I had made a bad, non-killing shot.

These animals are so tough. Even when my dad makes perfect shots on these animals they can still go a long way. That did not make me feel any better. Once Danie came we began to track again. We tracked for 6 hours and saw some good blood every now and then, but nothing great. When it got too dark to continue tracking we marked our last spot of blood and reluctantly went back into camp. 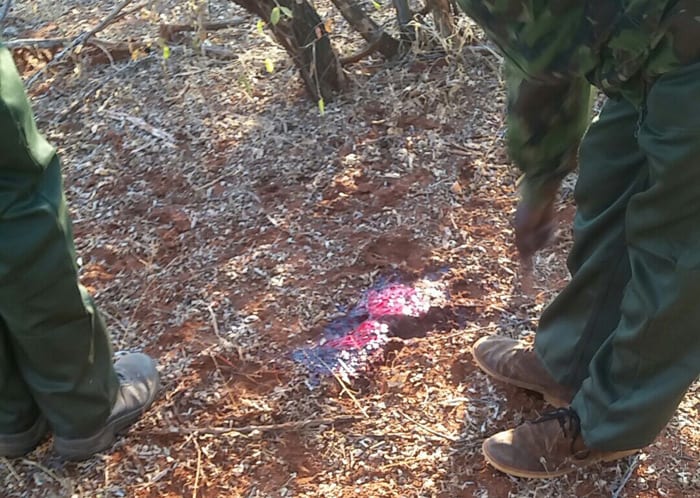 Things looked better when the trackers found this.

After a long night tossing and turning we headed out again to pick up the trail of my waterbuck. Danie and my dad, Matt, had to pick up clients who were coming into Johannesburg, so it was just Ron and the trackers helping me track the waterbuck. The morning started off cold. We found our spot and began to track again. We had many failed attempts until we got to a spot with 1x1ft puddles of blood. We were on a good trail of blood for about an hour. Then the blood started thinning out again. I don’t know how it was still going but it was. Two more hours passed and we lost the blood altogether. We were now following tracks. I needed a break because it was starting to get hot, so Ron and I went over to the nearest watering hole and took a seat. I noticed that some of the water had “spilled” out. I then noticed a spot in the water that looked like blood. I then turned a little to my right and saw a spot about and inch big on a rock. We called over the trackers and they got on the tracks that were near the blood. They came back about an hour later and tried to find more blood at the watering hole. Twelve hours of tracking later and still no waterbuck. It seemed like they had found where the waterbuck left the watering hole so began to follow that trail.

After 14 hours of tracking we decided to call off the trackers. We made the decision that if the waterbuck walked into a watering hole while a hunter was there they must shoot it. I was really feeling bad over not making a good kill and not finding the animal. 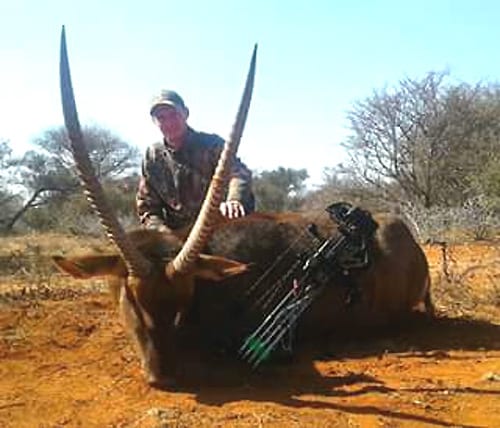 Being at the right place at the right time is what hunting is all about and for Troy Hawkins, it meant finishing the job.

The next day our good friend Troy Hawkins (Owner of Hawkins Taxidermy) saw the waterbuck. They were sitting in the hide and all of a sudden he walked in. Troy was able to make an incredible shot on him.

They measured his horns and he ended up being 31″ which is huge. Congrats Troy Hawkins on making an incredible shot on the 31″ Waterbuck!

Sometimes bowhunting doesn’t go your way. The slightest vital miss can make all the difference between a clean kill and a miss. These animals are so incredibly tough. The waterbuck lost tons of blood and still made it three days until he was finally put down by Troy. My shot ended up being a little back. About two more inches of penetration and the arrow would have hit the heart. That’s hunting. You win some and you lose some. Once again congrats, Troy! He’s a beaut!